Golden Retrievers are one of the breeds of dogs that needs to be groomed on a regular basis to keep their shedding under control. These dogs were bred to be both companion and hunting dogs and date all the way back to the 19th century. They have a very soft undercoat and a heavy outer one. This double coat is what causes the excess shedding if they are not brushed regularly. 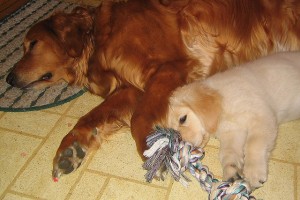 Here are some tips on how to clip and groom them properly:

Thinning the Coat with Clippers: The top coat, the uppermost coat of hair on Golden retrievers, may be thinned using clippers. Clipper sets typically come with a range of clipper guards, with Size 6 being the largest of these. Use a long Size 6 guard to clip the excess hair away, running the clippers smoothly in the direction of hair growth. This will thin the coat, which will help control shedding.

Trimming Small Areas: Small areas such as the ears and the areas between a golden retriever’s toes and pads require special attention during clipping. Trim overly long, straggly hair on the outer ear using thinning shears. Leave the inner ears untrimmed, unless your golden retriever has unusually thick fur on the inner ears. Clip the ear areas in small increments to avoid trimming too much.

Clipping the excess hair between the golden retriever’s paw pads is generally easiest to do using straight shears. Any hair that pokes up between the toes is excess, and can be carefully trimmed away. Fur that grows beyond the toenails is also excess, and also can be carefully trimmed. Properly groomed golden retriever paws are “tight and cat-like,” according to breed standards.

Now brushing your double coated breed will really help cut down on the shedding if you do it once a week or every other week.

Do you have any tricks on brushing or grooming that is good for shedding and your pup?