Does your doggie love to run around the yard rain or shine? Do they willingly let you know wipe their muddy paws off to come inside? Some dogs are Ok with this while others… not so much. If your dog is on the latter end of the spectrum then this post is for you. 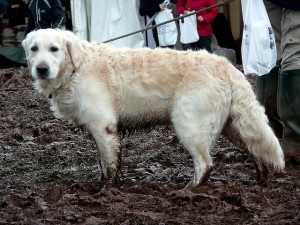 Here is some info on how you can comfort your dog to get them to be Ok with having their muddy paws wiped down after play:

To help a dog become more comfortable with having her feet handled and dried, take baby steps. Start by touching her paw while it’s still on the ground.  If you want, you can actually touch it with a towel.  When the towel touches the dog’s paw say “yes” and give the dog a tasty treat.  Practice with all four paws.

Once your dog is happy to see the towel coming toward her feet (because towel + foot = treat) put the towel near her foot, but don’t actually touch it.  Many dogs will move their foot to touch the towel on their own to get the treat.  If that happens – BIG rewards.  Then try letting her place her paw on the towel, you give a quick wipe off and she gets a treat.  Before you know it – no more muddy paws!