If you are considering getting a puppy then you need to do a little research and make sure you get the right one for you and your families lifestyle. Choosing the right breed can go a long way but in all reality, as long as you raise them and take great care of them, the breed should not be the main focus when selecting the right pup! 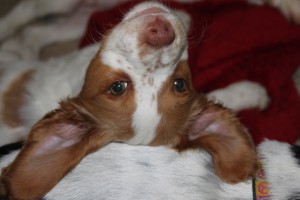 Below are 10 tips that can help you decide on what type of puppy to get and how to raise them right, right from the start:

1. “A puppy is born!” – There are 6.2 million puppies born in the U.S. every year! In comparison to only 4 million babies born in the U.S. per year, you can give each newborn baby at least one puppy as a birthday gift! Perhaps give the other 2.2 million to friends who don’t plan on having any human babies of their own.
2. Sensory – Like humans, puppies are born without teeth. However, they can’t hear, see or smell! Puppies don’t open their eyes or begin to hear until they’re 9 to 12 days old. They can’t smell until three weeks post birth. Until then, it’s very important for the mini-puppies to stay close to mom and their siblings to eat and grow properly.
3. Sleeping – Not much is different between human newborns and puppies when it comes to sleeping habits. The average human newborn sleeps 16 hours in a 24 hour time period, whereas puppies get around 14 hours of shut-eye. Take advantage of his snooze time and cuddle up to your cute new fur-ball when you can!
4. Lifestyle – When a puppy is first born, 90 percent of their life is spent sleeping while the other 10 percent is spent eating. Sounds like the life of a puppy is pretty awesome and relaxing! Since a lot of important development and growth happens for the pup during this time, it is important that they get their rest.
5. Sniffing – Let your pup sniff things before you! At 3 weeks old, puppies not only develop a keen sense of smell, but they’re also pretty amazing sniffers. The percentage devoted to sniffing smells in a puppy’s brain is actually 40 percent larger than humans — and they can smell things over a 1,000 times better than the average human!
6. Feeding – When a puppy is small, he needs to eat five small portions of food a day. Since he was born to nurse (and grazed as he felt necessary), you will need to teach him the proper portion control to avoid gorging his little tummy. As he gets older, he can survive on one to two larger feedings per day.
7. Walking – Puppies grow pretty fast and it takes them a bit of time to get used to their body. Just like when a human is trying to walk, puppies can be a bit clumsy. A bit more common in larger breeds due to their long legs and big paws, puppies are quite the clumsy creatures when they trot alongside you.
8. Social skills – Puppies are in the womb (and born) with a litter. They love to be surrounded by other animals and humans. When they are left alone, they get lonely! Some chase their tails and some look for trouble. When your pup is young, make sure to spend a lot of time with the little guy and put him in sociable situations to ease his transition into being a pet.
9. Chewing – Just like babies, puppies teeth grow when they are chewing. Needing to exercise their new chompers, a lot of puppies will chew anything in site. Don’t discipline for chewing, just train them on what’s OK to chew (such as their own chew toys and ropes) and what’s not (like your favorite Jimmy Choo pumps).
10. “I’m a big boy!” – Even though he may not act like it, a 1-year-old puppy is considered an adult! This is the equivalent to a human at 15 years of age. Not even old enough to vote, your pup is all grown up and ready for the world of adulthood!

Do you have any other tips to add to the list?
Article Source: She Knows
Image Source: Flickr
ADVERTISEMENTS