These little breeds reinforce that old saying that the “big things come in small packages”. 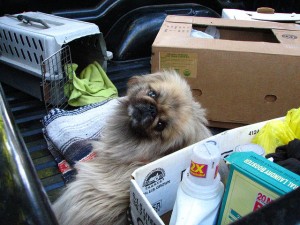 Check out these 8 small breeds with huge personalities:

#1 – Standard Schnauzer: This spirited, loyal and loving dog is one of the three Schnauzer breeds (the others being Giant and Miniature). Originating in Germany and bred to protect livestock and keep vermin away, they are intelligent, pack-pleasers who overflow in personality and are fun (if not humorous) to watch. Truly a pint-sized pooch who knows how to live large, this breed is so addictive that many Standard Schnauzer owners have more than one.

#2 – Russell Terrier: A distinct breed from the more popular “Jack” or “Parson,” this Russell Terrier is alert, inquisitive and eager. But mostly, they’re known for being high-energy – and that’s an understatement. Highly intelligent and reward-oriented, pet parents are wise to keep their active minds well stimulated – and be prepared for plenty of laughs from their playful antics.

#3 – Pekingese: Charm, confidence, and smooth sophistication does not stop these double-coated dynamos from living large. Known to be opinionated on what they will and won’t do, this ancient breed – dubbed the “Lion Dog” – Pekes command attention. According to the American Kennel Club, the smallest Pekingese are known as “Sleeve Dogs” because they were carried in the voluminous sleeves of the Chinese nobility.

#4 – French Bulldog: Dubbed as playful and clownish by Frenchie lovers, their outgoing personality is a happy-go-lucky bundle of fun – bright, cheerful and certainly to invoke giggles (if not guffaws). Need evidence? Check out some photos of Manny the Frenchie on Instagram or Facebook. Along with a joyful and joy-invoking personality, expect snoring and drool; they’re part of the character and fun of this breed.

#5 – Finnish Lapphund: This very popular breed of Finland weighs between 33 and 53 pounds – small but not tiny. Originally used by the semi-nomadic Sami tribe, their role morphed from hunting to herding reindeer. Alert and eager, they thrive with regular exercise. Although considered independent, they can be easily trained and known to be sensitive to their needs of their owners. Perhaps that’s why the Finnish Lapphund is gaining in popularity around the globe.

#6 – Dandie Dinmont Terrier: Originating from Great Britain in the 1600s to hunt otters and badgers, this plucky pooch is lively, affectionate and happy-go-lucky. At home, this breed is undemanding, relaxed and may even be silly, but becomes all business when its hunting or chasing instincts are aroused. No badgers in your backyard? Daily walks and regular play will suffice for this breed.

#7 – Schipperke: This small Belgian breed is smart, observant and a quick learner. But perhaps their best-observed trait: just how quickly they’ll leave you in the dust when there’s something to chase. (Translation: they need a firmly held leash and/or fenced backyard.) Considered among the more inquisitive and impulsive of all breeds, the Schipperke is a great watchdog with an inherent suspicion of strangers.

#8 – Boston Terrier: Rounding out the punitive pack with personality: the Boston Terrier. Originally bred from a variety of fighting breeds, today’s Boston Terriers are known as popular and excellent family dogs – gentle, loving, quirky and well-mannered. Their enthusiasm can be contagious, but they need regular mental and physical exercise to keep them from becoming too rambunctious and a bit high strung.

So now that you know all about these tiny little breeds, do you think you will ever become an owner of one in the future?