Here is a really sad story about a family here in California that can not find a new home because they own a Pit Bull that they will not give up. I commend them for not abandoning a family member over other peoples ignorance. I know they get a bad rap but with a loving family they are some of the best dogs ever. Wouldn’t you agree? 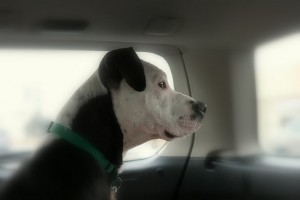 For the past year, the Devia family has chosen to be homeless rather than give up their beloved dog. Carol Devia, her husband Peter and her sons Leandro and Christoffer own Camilla, a lab mix, and Rocco, a pit bull. Both are sweet, housetrained dogs, according to the family. But only one is keeping them from moving out of a car that they have been living out of in Walnut Creek, Calif. “When landlords see Camilla, they have no problem with her. Everybody will take her,” Carol Devia said. “But as soon as they see Rocco, they say ‘Oh no.'”

Animal welfare advocates say this is part of a housing crisis for pit bull owners, with some landlords forcing families to choose between a roof over their heads and their beloved pup.

“It’s not uncommon for people to say ‘I can’t take the dog to the shelter where it will be killed,'” said Donna Reynolds, the director of Pit Bull advocacy organization BAD RAP. “What we’re finding is our inbox is filled with people who say ‘I’m about to go homeless, can you take my dog?'” she added.

“I can’t find a place unless I give up my dog, and everyone tells me to, but I can’t do that,” Devia said. “We’ve had Camilla her whole life and Rocco her whole life.” For now, Devia said her family spends a lot of time driving back and forth between wooded areas where the dogs can get exercise and parking lots where they can get Wi-Fi and make food with their Crock-Pot plugged into the cigarette lighter. They’re working new jobs delivering newspapers at night and sleeping in their car during the day, she said.

For families who are struggling to find housing that will accept their dog, Reynolds suggest they ask friends for help, post on Craigslist, and talk to rescue organizations. They can also consider getting an insurance policy on the dog, so any liability doesn’t fall to the landlord ­- though so far, that hasn’t helped the Devia family.

If you or anyone you know is in a similar situation there are a few things that can be done first. Try reaching out to friends who own homes to Foster while you figure out a living situation or talk to rescue organizations. Also try insuring your dog as some landlords are Ok with this as an option.

Do you have any other advice for anyone in this situation that you can share with us and our readers below?