Have you ever heard of a Dogo Argentino or a Bergamasco? These are just 2 or the 8 dogs that will be recognized by American Kennel club over the next few years. To get in with the AKC you must go through a very difficult and long process to get your new breed approved and inducted.

Check out these breeds that you are sure to hear of in the near future if you haven’t already: 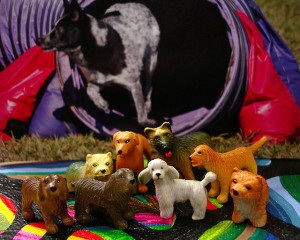 Belgian LaekenoisBelgian Laekenois: The rough-coated Belgian Laekenois is the rarest of the four Belgian herding breeds, and the only one without full AKC recognition. He’s an alert, medium-sized dog with prick ears and a square body, plus a tousled coat that gives him something of a boyish charm. The Laekenois has a protective personality, and might be possessive of his favorite family members, so early socialization is key. Thanks to his impressive herding heritage, he must be taught not to chase or nip at the heels of children or other animals. Watch closely, and you might see him move in a curve instead of a straight line, like he’s circling a flock – this is also a quirky feature of his herding past.

Cirneco dell’Etna: The rare Cirneco dell’Etna has a fascinating history: She’s believed to have descended from dogs left behind by the Phoenicians along the coast of Sicily. Depictions of the breed appear on Sicilian coins minted as early as the 3rd century B.C. She’s named for Sicily’s Mount Etna, and silently hunted rabbits, hares and even birds in her native Italy. This dog is a spectacular jumper, so be prepared to install a high yard fence and watch what edibles you leave out on the counter – a short baby gate isn’t going to keep this canine from traveling to where she wants to go. With her thin coat and bony body, the Cirneco isn’t built to handle extremely cold weather; you’ll also need to watch for muscle and toe injuries from running.

Wirehaired Vizla: The history of the Wirehaired Vizsla remains somewhat mysterious, because many records of his existence didn’t survive World War II. Development of the breed began in the 1920s in the Austria-Hungary region by hunters and falconers who wanted a different version of the Vizsla, the national dog of Hungary. They bred a dog with the hunting qualities of the original Vizsla, but added a heavy, dense wire coat so the dog could better withstand cold winters. Aside from coat texture, the Wirehaired breed is a bit taller and more laid-back than her Vizsla cousin. She has a high drive to please, and some call her a “Velcro dog” because of how she sticks to her person. Whether you want her to hunt waterfowl or work as a therapy dog, your wish is her command.

Peruvian Inca Orchid: When Spanish conquistadors invaded Peru, they stumbled across strange, hairless dogs lounging in orchid-scented homes. They named them “perros flora,” Spanish for “flower dogs.” Called the Peruvian Inca Orchid in English, this physically sensitive breed comes in hairless and coated varieties. The fur of the coated dogs comes in many lengths and textures, and some canines have a narrow patch of hair atop the head, not unlike a mohawk. The hairless dogs require moisturizing lotion, dog-safe sunscreen and some kind of sweater in the winter. Peruvian Inca Orchids are also emotionally sensitive, so use positive reinforcement and kind words in training.

Bergamasco: The Bergamasco’s stunning coat looks like it requires expensive professional grooming, but don’t be fooled – her hair is much easier to care for than you think. The Bergamasco’s corded or matted fur is actually a combination of three different types of dog hair – confusingly called dog hair, goat hair and wool – that weld together into mats. That long mop of hair protects her eyes from the sun and her skin from mosquito bites. Grooming this dog might seem like a daunting task, but her hair care is relatively simple. Just remember to clean her face after meals to prevent a wet wool odor, and maintain the natural oils in her coat by not using shampoo to bathe her. Appearances aside, the Italian Bergamasco is a patient sheepdog who excels at obedience, hiking and even therapy visits with hospital children or people with disabilities.

Azawakh: If you’re looking for a loyal sighthound with a protective streak, then the svelte, elegant Azawakh may be your match. The aloof breed hails from the Sahel region of Africa, a desert area that encompasses parts of Mali and Niger, including a region called the Azawakh Valley. There, the Azawakh protected the nomadic Touareg people and guarded their tents; he also played a role in hare, antelope and wild boar hunting. Because the Azawakh is so devoted to his people, he might bark at strangers, and he requires extensive socialization in puppyhood so he can adapt to new situations later in life. Since he has thin skin and not much body fat, the Azawakh would not do well in extremely cold or wet conditions – he’ll thrive in a home with abundant exercise and a comfortable place to rest.

Sloughi: The sleek Sloughi is a smart and affectionate sighthound who is built for speed. In his native North Africa, he lived with the nomadic Berber people and hunted jackals, gazelles and desert hares. His strong prey drive is still very much apparent, so make sure you’re there to supervise the Sloughi around other pets. He quickly forms an unbreakable bond with his family, which makes rehoming a Sloughi very difficult. He’s also fast in mind and body, so make sure your yard is secure – an underground electric fence won’t stop this breed from chasing squirrels across the street.

Have you heard of any of these breeds or know anything about them?