Your Vet may have told you to not let your dog lick any ones face due to bacterias and parasites. But, recent studies have shown that dog licking to heal wounds was an ancient practice. I have always been back and forth on this topic as I have always kind of believed in holistic medical practices.

So what is the truth behind pet kisses? They are both bad and good, check it out: 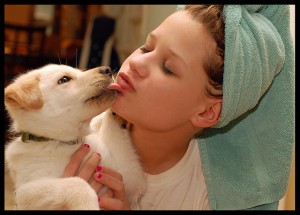 Bacteria: Pastuerella is a normal inhabitant of the mouth in cats and dogs that can cause skin, lymph node and, sometimes, more severe infections. Bartonella henselae, a bacterium that is transmitted to cats from fleas is also housed in the cats’ mouths. It is the cause of a severe skin and lymph node infection called cat-scratch-fever. Theoretically, humans can be infected by these bacteria by coming in contact with the saliva from a cat or dogs lick. The Center for Disease Control reports that most pastuerella and bartonella infections are the result of bites and scratches. Little data are available to substantiate that being licked by a pet is a major means of infectionSalmonellla, E. coli, Clostridia and Campylobacter are intestinal bacteria of pets that can cause severe intestinal disease in humans. The pets can be free of symptoms yet pass these bacteria in their feces (poop). Most human infection is generally due to oral contact of hands contaminated by the pet’s feces or fecal residue. Because pets lick their anus (butt), these bacteria can also be present in the mouth. Facial and lip licking is a potential route of infection from pet to human. Again, there is little proof that this is actually a major means of transmission.

Parasites: Pets are hosts for many parasitic worms and single celled parasites. Human infection from these parasites can result in intestinal disease, skin problems, blindness, and brain disorders. Pets may live with these parasites in their intestines with no signs of illness. But eggs passed in the pet’s feces can infect humans. Like bacteria, the major route of infection to humans is fecal-oral. Pets that have licked their anus can potentially pass the parasite eggs to humans during facial licking.

The Benefits of Pet Saliva – The belief in the curative power of a dog’s lick dates back to ancient Egypt and has persisted through time. In modern France a medical saying translates to “A Dog’s Tongue is a doctor’s tongue.” Recent research has identified products in saliva that indeed aid in healing.

Prudent Precautions With Pet Saliva – The risk of bacterial or parasitic infection from pet licks are the greatest for very young children, the aged, and immunosuppressed individuals on chemotherapy or inflicted with AIDS. Individuals with healthy immune systems are unlikely to become infected. Despite the relatively low risk of infection from pet licks, some sensible precautions by pet owners are in order. The Companion Animal Parasite Council recommends:

Do you have any experience with anything like this that you can share with our readers to prevent them from having the same problem?