This breaking news story about the Iditarod Dog Sled Race in Nome. Just this morning at 4:04 AM, Dallas Seavey crossed over the finish line, having no idea he just won the race. Other competitors were stuck in safety or knocked out of the race completely due to severe windstorms. 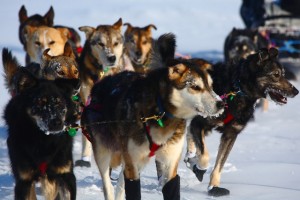 Here are some details taken from the race:

Seavey beat Zirkle by less than three minutes, ending a frenzied night of racing that saw the lead go from King to Zirkle to Seavey in less than three hours.Seavey and his team broke the Iditarod speed record, finishing the 1,000-mile race from Willow to Nome in 8 days, 13 hours, 4 minutes, 19 seconds. He shaved more than five hours off John Baker’s 2011 record of 8 days, 18 hours, 46 minutes, 39 seconds.

Until Monday when coastal winds turned nasty, weather hadn’t been a factor in the race. Then it became all about the weather, at least for the leaders.

Seavey essentially won by rushing through Safety, which he said was without power and chaotic because of the storm. He spent three minutes there, long enough to check in. He arrived at 1:13 a.m. Tuesday and was gone by 1:16 a.m.

Seavey had been surging since Kaltag, about 630 miles into the race. He trailed the leaders by 10 hours at that checkpoint.By the weekend he was posting some of the fastest run times of the race, his team becoming more powerful as the race wore on. Seavey likes to call the come-from-behind approach, which carried him to victory in 2012, “building a monster.” The wind that cost King his race didn’t seem to slow Seavey’s team.

“My team is not built for top-end speed,” he said in Kaltag. “My team is built for endurance and tough runs.”

In Nome, he said that by the time the race reached White Mountain, “winning was not even in the back of my mind.”

“This year we really were focused on running our team to the best of their abilities,” he said. At some point, he said, he stopped comparing his times to those of others.

“I stopped and said, ‘Wait, that doesn’t matter,’ ” he said. “In my mind, the perfect race is when you finish the race with zero in the tank.”

This just goes to show you that if you focus on endurance and finishing what you set out to accomplish, that you will achieve your goals. So neat that this was his mentality and he ended up winning the race.

Are you familiar with this race and who did you want to win?