Have you ever had jury duty? What if you were summoned for jury duty but you could not attend? Not because the timing or work but simply because you have four feet and are covered in fur. 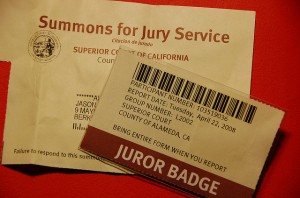 Here is a silly little story of how one German Shepherd was called upon for duty:

“I knew there was a mistake right away,” the dog’s owner, Barrett Griner IV, told TODAY.com.

Sent from the Cumberland County Clerk of Courts, the letter was addressed to IV Griner, the 5-year-old German shepherd. “It’s a mistake that happens all the time,” Griner said. “It’s a computer error that looks for names and sends it out.”

Griner IV has yet to contact the county clerk office, but he will let them know soon that his dog will not be appearing for jury duty later this month.

“It’s funny how it played out,” he said. “How many people really name their dog IV?”