Building a loving bond with your pet through trust, patience and positive reinforcement is the number one goal to raising a dog. This will help you teach your pet good habits and behavior. Depending on the breed, it can take anywhere from 4 to 12 months to fully potty train them. Also the smaller the dog the more often they need to defecate. 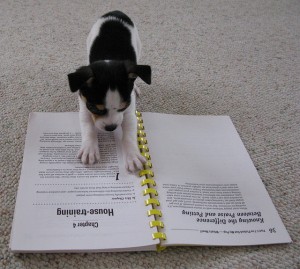 Below are some potty training tips to get you started or to help break bad potty habits:

When to Begin House Training Puppy – Experts recommend that you begin house training your puppy when he is between 12 and 16 weeks old. At that point, he has enough control of his bladder and bowel movements to learn to hold it.

Steps for Housetraining Your Puppy – Experts recommend confining the puppy to a defined space, whether that means in a crate, in a room, or on a leash. As your puppy learns that he needs to go outside to do his business, you can gradually give him more freedom to roam about the house.

When you start to house train, follow these steps:

Using a Crate to House Train Puppy – A crate can be a good idea for house training your puppy, at least in the short term. It will allow you to keep an eye on him for signs he needs to go and teach him to hold it until you open the crate and let him outside.

Here are a few guidelines for using a crate:

Signs That Your Puppy Needs to Eliminate – Whining, circling, sniffing, barking, or, if your puppy is unconfined, barking or scratching at the door, are all signs he needs to go. Take him out right away.

Do’s and Don’ts in Potty Training Your Puppy – Keep the following do’s and don’ts in mind while housetraining your puppy:

Do you have any other tips or anything to watch for to make it easier to potty train a puppy or even an older dog?