It is important to support your dog as they age. This will further your bond and keep them less afraid of what aging brings. 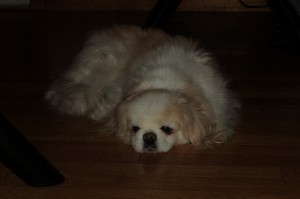 Here are some tips on how to help your dog navigate through old age:

Basic Needs Of Older DogsAmong the basic things owners need to know about raising older pets, Dodman says, is that older dogs are typically more sensitive to extreme temperature changes because of changes in their metabolism.

“They’re really like older people,” he explains. “Older people are often the ones who are the victims of these freezing bouts or extremes of heat. They’re less able to thermoregulate. So we have to take account of that by making sure they have some kind of blanketlike coat or contraption on to keep them warm and not keep them out so long in cold weather. The same goes for heat. You really don’t want to leave them out in the yard, especially tied up on an extremely hot day. They can dehydrate. They’re less able to cope with the change in temperature, and it’s a recipe for disaster.”

Dodman also recommends moderating exercise for older dogs, because heart and lung function do deteriorate. And he warns owners who purchase dog food packaged specially as a “senior diet” for their pets.

“While there are some laws that govern what comprises a puppy food and while there are recommendations and regulations concerning what goes in dog food, there’s no real legal requirement or definition of what constitutes a ‘senior’ dog food,” he says. “So they’re out there — but the composition is highly variable.”

To make sure your dog’s diet is appropriate, Dodman says to check with your veterinarian before introducing any new food into the pet bowl. He also recommends checking with your vet if your dog appears to be overweight — because the extra weight may affect your dog’s joint health.

“The large mass or weight of the dog will stress the joints further,” he says. “You can often get a lot of relief [from joint pain] if you can get him down to his fighting weight.”

Anther concern for many owners, says Dodman, is what to do when their pet gets a terminal disease. Cancer kills 500,000 dogs a year in the United States and affects half of all dogs older than 10 years.

But deciding whether or not to treat cancer aggressively is difficult for many pet owners, says Dodman, because there are so many things to consider: the cost of treatment, a pet’s quality of life after treatment, whether the treatment is painful and how long a dog’s life can be extended.

“ We listen carefully about what people are telling us about a dog’s life and we look carefully at the dog.

“If, for example, you had a relatively noninvasive procedure that wasn’t going to cause your dog a lot of pain, and it was going to buy him an extra six months and you could afford that treatment — and those six months were quality life — then why not, if you can afford it?” he says. “But, on the other hand, just to drag out an existence. … Some people, I have known in the past … have done that. Owners, with cooperating vets, have just gone step after step after step, when really, you’re on a highway to nowhere. If the dog is in chronic pain and doesn’t have long to go, sometimes I question the wisdom of that approach.”

“Like in humans, there’s a certain constellation of signs that are not accounted for by any physical finding or disease,” he says. “It’s a diagnosis of disease or rule out. To make the diagnosis, there is a on the Pfizer animal health website where it divides the signs a dog might have. If you take the test — and then take the test a month later, and find the number of signs is increasing, that’s a very good sign that you are on the Alzheimer track.”

Eventually, there may be a time in a dog’s life where he may indicate by his behavior that it’s time to let go, says Dodman.

“We listen carefully about what people are telling us about a dog’s life and we look carefully at the dog,” he says. “If they have reached a point where they have given up — they’re basically lackluster, not enjoying life, not playing, not interacting, haven’t responded to any therapies, losing interest in food and social interactions — and nothing you can do can bring them back, you have to think very seriously about what is the quality of life.”

Can you share some experience you have had with an aging dog to further shed some light on this topic?