I am sure that everyone would defend their furry best friend as one of the most intelligent dog breeds. Sometimes it is for a great reason, like their skills and abilities and sometimes it is from pure love. The truth is that 122 Vets were surveyed and here are the results:

Border CollieNo. 1: Border Collie – The Border Collie is an intense, hardworking, highly energetic dog whose ability to impose his will upon sheep is legendary. In fact, he’s so good, he just might impose his will on you, too. He has astounding focus, which is a real plus in the field, but if he’s left without a job to do, that focus can be a problem. 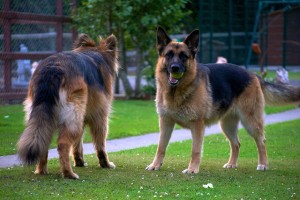 No. 2: German Shepherd Dog – The German Shepherd is an adaptable, fearless dog who’s a natural protector, making him a great fit for military and police work. However, even if you don’t carry a badge, he’s still a loyal, energetic companion. He loves spending time with his family, especially if that time is spent playing, running, hiking, working or doing something else that uses up some of that energy.

No. 3: Poodle – Don’t judge the Poodle by his fancy fur and pretty face. This dog has beauty and brains, along with a serious sense of humor. Poodles are far from prissy; they’re active dogs who thrive on learning and attention from those they love. Poodles are fabulous choices for agility and obedience competitions – but keep in mind that even though he’s not a froufrou show dog, your Poodle will still need intense grooming.

Australian ShepherdNo. 4: Australian Shepherd – The Australian Shepherd is one devoted dog, and he’s not afraid to show his love by leaning on your leg, sitting on your foot or finding a way into your lap (never mind the fact that he might weigh as much as 65 pounds). But he’s not just a snuggle bug; he’s a total braniac who excels in just about anything he puts his sharp mind to – obedience, agility, flying disc competitions, herding trials, you name it.

No. 5: Golden Retriever – The gentle Golden Retriever is a people pleaser, to be sure, but this sweet face has a big brain behind it. Originally developed to hunt, today’s Goldens are fiercely devoted family dogs who need plenty of exercise in order to keep destructive tendencies at bay. Like the other smarties on this list, he’s a good choice for activities that utilize his mind and body, so go ahead and sign him up for that dock diving or fly dog competition. As long as you’re willing to put in the work to teach him, he’ll do the rest.

So now that you have had professional feedback on the topic do you still feel your dogs breed is the smartest and why?