Don’t pass off a lingering limp and chalk it up to old age for your pup. It may be a serious condition and further injury could easily be prevented with a trip to the vet.

Here is some insight on types of knee injuries and what can be done: 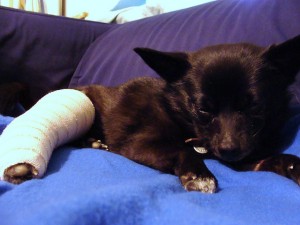 Human athletes often injure the knee’s anterior cruciate ligament (or ACL), and the CCL problem in dogs is comparable. However, while ACL tears are the result of one unfortunate accident, like a fall down the stairs or a twist on the basketball court, CCL deficiencies are usually due to a degenerative process that develops over the years as athletic dogs leap to catch flying discs, tear around corners and engage in other high-impact activities. “It’s the most common orthopedic injury in dogs,” says Dr. Cook. “It can occur in any breed at any age, though it’s most common in larger dogs like Newfoundlands, goldens, Labradors and Rottweilers between the ages of two and nine.”

Prevention: While CCL deficiencies can’t always be avoided, the best way to stave them off is to keep your pet at a healthy weight. “Don’t let your dog get heavy, and keep the muscles around the knee strong with hiking, swimming and leash climbing,” advises Dr. Cook, who points out that the slender greyhounds belong to the only large breed not afflicted with CCL problems. “You can’t strengthen the ligament, but you can strengthen the muscle around it.”

Cure: Small dogs that are overweight are sometimes treated conservatively with diet and exercise modifications. For the larger breeds more prone to the injury, though, the best solution is usually surgery. Traditional methods involve cutting the bone, and this can lead to complications — from bone fracture to joint damage. Dr. Cook’s technique, known as Tightrope CCL, relies on drilling and small incisions rather than cutting the bone. Because of the drilling, a canine must weigh at least 40 pounds to be a candidate for the Tightrope technique.

Recovery: While the surgery is a cure, without rehabilitation, a dog will not heal. CCL surgeries like Tightrope require 10 to 12 weeks of post-op limited activity. “The dog should be walking short distances and only on a leash. It should be in a crate when you’re not around to monitor activity,” emphasizes Dr. Cook. “Don’t fall for that sad face and let your dog out!” As the weeks of rehabilitation progress, your best friend will most likely experience a 95 percent return to full function. It will also be officially arthritic. At this point, Dr. Cook says, it becomes important to attend to that condition, both with weight management and feeding foods containing glucosamine and chondritin sulfate, which are extracts from fish tissue and cartilage that are acknowledged building blocks for canine cartilage.

Going through this with your dog can be very difficult but also very rewarding spending extra time together while they are rehabilitating.

Has your dog had knee surgery and what is your opinion on this?