Here is a truly amazing and heart warming story about a 9 year old boy in the Philippines who has opened his own no kill shelter for stray dogs. He received enough donations (without even asking) in order to rent out a much larger space then his garage, where his shelter initially started. It reminds me of the strong bond animals naturally have with humans and how much we have taken from them in order to evolve as a race. 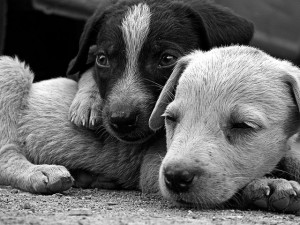 Doesn’t it seem refreshing to see such a young kid rekindle that bond and remind us all that these stray animals need out help?

Check out this 9 year old boy’s story on how he got started with his no kill shelter:

Ken has enjoyed helping the street animals in his neighborhood for a long time.  He spends time with them and feeds them, but has been hoping to be able to do more.  He has been dreaming of having enough money to open a non-profit, no-kill shelter to really help them.

A few months ago, some pictures of Ken and three strays surfaced on the internet, touching hearts worldwide.  People began sending in donations to the ambitious boy to help him accomplish his goal.

“We got enough money to get the dogs I was feeding off the street, feed them high quality canned food, and provide them with veterinary care,” Ken said on his website (with the help of his father).  “They gained a LOT of weight, their open wounds healed, and their fur grew back. They also learned not to be scared of humans.”

He and his father built a temporary shelter in their garage for the three pups, named Brownie, Blackie, and White Puppy.  Ken decided to call it the Happy Animals Club.

“The next step will be to raise enough money to care for as many dogs as possible. Also, we need to make a system for finding the dogs good homes when they are ready. This is a big challenge because in the Philippines most people want pure breed dogs. They don’t like mutts, even though mutts are just as smart, just as loyal, and just as loving.”