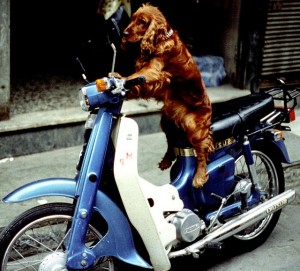 After you have taught your dog to do all the standard tricks you usually branch out to neater ones or ones with several combinations of tricks they already know. What about tricks that seem like they would be impossible to teach a dog or for them to actually learn? Like Driving a scooter? Haha, ok well not driving so much but playing a piano or skateboarding.

Check out these 10 unusual tricks that you can actually teach almost any dog:

When teaching a complex trick, such as picking up laundry, begin with the last step, says Jaime Van Wye, owner of the dog agility training center Zoom Room in Hollywood, California. “First, teach him to drop an object in a container. Give him an object he likes, such as a toy, then put a container under his mouth and give him the drop command,” she says. Once he’s dropped the toy in the bucket, immediately give him a treat. “Then the dog will understand; ‘When I drop it in the bucket I get a reward,'” she says. Next, toss whatever training tool you’re using onto the floor and give a command such as, “Go pick up your toy.” The exact verbiage doesn’t matter—what matters is that it’s always said the same way.

Like picking up laundry, recycling is a “retrieve” trick; however, your dog also has to learn how to separate the items, which comes particularly in handy when you’re busy cooking and need help disposing of empty containers. “The hard part about recycling is getting dogs to pick up aluminum cans—they don’t like the way they feel, so it’s a good idea to start with plastic bottles, which they like more,” Van Wye says. First, follow the laundry steps above using plastic bottles until your pooch has learned to drop them in the recycling bin. Once he’s mastered that, switch to cans. Dedicate different bins to aluminum and plastic, and train him separately for each bin. “Then you can mix up the types of bottles and teach the dog he doesn’t get a reward if he puts the wrong object in the wrong bin,” Van Wye says.

Your dog might not be as good as this bulldog, who can actually steer the skateboard, but you can probably get your pooch to hop on the board and ride it for a bit. Start by getting him used to being on the skateboard. Put it on the floor, with sandbags, beanbags or something else to keep the wheels from moving. Give him a treat every time he interacts with it, Van Wye says. Once he’s comfortable with the board, put his front paws up on the back of it and give him a treat, providing more treats and saying, “Good boy!” every time he does it on his own. Once that’s a success, take away the bags and put the board on a carpeted floor (which has less traction) that slopes downward slightly. After he puts his front paws on the board, “put the treat to his nose and then move it so he steps [forward, pushing with his hind legs]. Once he gets the idea that he should stand on the skateboard and take a couple of steps, speed it up.”

You may not be able to challenge Fido to a game of pick-up, but he can learn how to make a basket. First, get him used to the ball. Start with something light, like a small beach ball, and put it on the ground. Every time your pooch touches it or pushes it with his nose, give him a treat. Once he’s familiar with that, start throwing the ball up in the air so it lands near him. “When the dog goes to get it, treat him. Next, bounce it off his nose—you have to throw it off his nose and get him used to that,” says Karen Halligan, DVM, director of veterinary services at the Society for the Prevention of Cruelty to Animals in Los Angeles. Once he’s mastered bumping the beach ball off of his nose, you can upgrade to either a volleyball or basketball. Bump (or toss) a volleyball back and forth with him, like this pooch. Or get him used to bumping the basketball, eventually doing it near the hoop until he makes a basket. Afterwards, praise him and give him a treat. Sooner or later he’ll figure out that making baskets means treats!

To teach water skiing, it’s probably best to put your pooch on a board instead of two skis because of balance issues. “First, try and get him used to the board on dry land,” Dr. Halligan says. “But stop if he gets scared or if he’s not enjoying it.” The key, she says, is plenty of positive reinforcement when he does the right thing. If he doesn’t do it correctly, avoid negative reinforcement, otherwise, you run the risk of turning him off of the trick. Once your dog is used to the board, move him to a pool or a shallow body of water. “Get him comfortable balancing before you start pulling him around,” she says. When he’s used to being pulled around by you, then you can try with a boat, going very slow at first and gradually building up speed over time.

A variation of the “paw touch” (the move used when he “shakes hands” with you), train your dog to play piano by teaching him a general command and then associating it with the piano. First, put a large disc like a plastic container lid or Frisbee on the floor. Every time your pooch paws it, give him a treat and a positive command to reinforce the movement. Once he’s figured out that if he touches the disc he gets a treat, you can create a smaller and smaller target. As soon as the target is small enough, put it on top of the piano’s keys and give the command. After mastering that, you can remove the disc and he’ll go to the piano on command.

Get a Drink from the Fridge

Whether it’s a beer or a soda, you can train your pooch to get a drink from the fridge—but be forewarned, this trick involves quite a bit of work, and is best suited for medium- to large-sized dogs, such as a Golden retriever or Labrador retriever. “This is really advanced behavior because there are so many elements to it and everything has to be taught separately,” says Ashley Summers, a dog trainer at The Pet Staff in Los Angeles. “If you have an animal that’s already good with retrieving, that’s going to work in your favor.” For starters, teach your dog to retrieve. Once your dog has proven his retrieval skills, you have to master opening and closing the fridge. To do this, tie a piece of rope to the door of the fridge and get him to touch it with his nose, providing a treat after he does. Once he’s learned to touch the rope, get him to grab it in his mouth and reward him. Then, using a treat, teach him to pull the rope back without dropping it, which he’ll be tempted to do in order to get the treat, Summers says. After he learns to open the fridge, teach him to retrieve the beverage, using the aforementioned retrieval skills. Summers recommends clearing out the shelf, so that the drink is the only thing on it and therefore easily accessible. Finally, teach him to jump up and push the door closed before bringing you the drink.

While your pooch probably won’t be able to do the merengue like this dog, you can train him to boogie down with you. “Getting him to stand on his hind legs is pretty easy; just place a treat by his nose and raise it and say, ‘Up, up!’ until he stands,” says Summers. Once he’s done that, hold it up for increasing amounts of time to build up how long he can hold the stance. “Once he’s mastered that, then you can walk backward and get him to follow you, and walk forward so he’ll back up.”

If you own a large, strong dog breed, such as a Saint Bernard, Alaskan malamute or dog of comparable size, this trick is for you. In a gated, safely enclosed area, you can hitch your dog to a wagon and teach him to pull it. Dr. Halligan recommends getting him used to the harness first. “Then you just hook up the harness to the cart and positively reinforce him to come with you. Go just a short distance at first.

Positive reinforcement will take you far with this type of trick. “Give him a treat and a command whenever he barks or makes a noise you want him to repeat,” Dr. Halligan says. “Even when he sneezes, you give him a cookie and say, ‘Sneeze.’ Then repeat that until he can do a real sneeze when you say the command. It’s really easy.”