Back in 1937, Sinbad the sailor dog came aboard the Campbell and became part of the crew. This dog was know not only for his service at sea but also as a patron at port. He acted just like the rest of the sailors and even kept bar tabs and took aspirin. He was a friend and fought right next to many of the best sailors during the war.

Here’s a little more about this dedicated pooch, Sinbad: 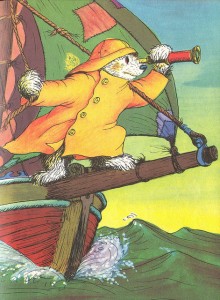 A “salty sea dog” all the way, Sinbad stood watches with the crew, ate and slept with the crew in their mess and their bunks, always choosing a different bunk mate each night so he could spread his friendship among the crew. He deliberately avoided the officer’s wardroom or quarters and only on rare occasions would he associate with officers when on liberty. Yes, Sinbad was a sailor all the way and somewhat of a boozer. Every time the CAMPBELL would make port and liberty was granted, he would be first off and along with his shipmates, hit the bars. A typical Sinbad liberty, wherever it was, would see him march right into a bar, spot an empty bar stool, jump up on it and bark once. The bartenders would automatically pour a shot of whiskey with a beer chaser. Sinbad would lap them up, jump down and leave, heading for the next bar. His tab was always picked up, no questions asked. He would do the same in several bars and would then return to the CAMPBELL with some crewmembers, just as bombed—usually more so—as his buddies and hit the sack to sleep it off. The following morning, the ship’s doctor would prescribe an aspirin, which he would take, to see him through another day.

The dog’s press clippings became enormous. In Ireland, a notice invariably appeared in the society columns of local papers whenever the cutter arrived and he went ashore. He was known on two continents and in a hundred ports. He was on the finest social terms with high-ranking naval officers of five nations besides thousands of sailors, bartenders and waterfront characters he met at his favorite drinking places.Sinbad, the four-legged sailor—or rather Coast Guardsman—was as much a part of the CAMPBELL as his two-legged shipmates. His contribution to that ship was incalculable in terms of the morale boost he provided. To his shipmates, he was their talisman, their good luck charm that brought them through battles with submarines, storms and the terrible North Atlantic winter ice. When the CAMPBELL became involved in a 12-hour duel with a wolf pack of German submarines, eventually ramming one and sinking it with gunfire, Sinbad remained on deck, observing the action because damage suffered in ramming the sub. Most of the crew of CAMPBELL was transferred to another convoy escort to lighten the vessel and try to keep the gaping hole in the bow above water. Among those chosen to stay aboard was Sinbad, because as the Captain said, “As long as Sinbad is aboard, CAMPBELL will survive.” And sure enough, CAMPBELL made it back to port with Sinbad and the skeleton crew safe and sound.

After the war Sinbad went on tour in the US and stay in service on shore, for a total of 14 years, until he passed away back in 1951.

Do you know any neat stories about any other service dogs that you can share with us below?