Maryland, Vermont, Washington, Utah, Missouri and South Dakota may join 17 other states nationwide by banning the “breed-specific-legislation” or BSL on Pit Bulls and other bully breeds. Even a nationwide survey states that 84% of Americans don’t think the government should be able to regulate what dog breeds are Ok and which ones are not. 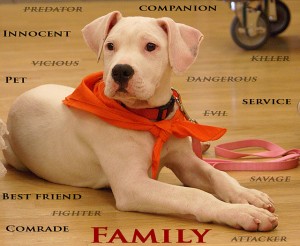 Below is some more information on what is actually going on:

“Today was a good day for dogs,” Ledy VanKavage, an attorney with Best Friends, told HuffPost just after the South Dakota Senate’s Local Government Committee met to consider its bill about a week ago. “We have 17 states that outlaw it now. We think every state should have it.”VanKavage said that states are becoming more amenable to passing these prohibitions for a combination of reasons. “People view dogs as members of their family. And more and more cities are getting sued. If a city tried to take my dog simply because of its breed, I’d lawyer up in a minute,” she said. “In America, responsible dog owners should be able to have whatever breed of dog they choose.”

Plus, VanKavage added, “The scientific studies show it doesn’t work.”

Indeed. In December, the Journal of the American Veterinary Medical Association published a study looking at the factors at play in fatal dog attacks. Studying 256 dog bite fatalities from 2000-2009, the contributing factors were found to include the failure of an able-bodied person to intervene in the attack and the dog being abused by its owner. Breed was not deemed to be a significant contributing factor; the researchers found, moreover, that breed could not even be reliably determined in most of the cases.

Best Friends also emphasizes the cost of enforcing anti-pit bull bans; the group commissioned an economist to put together a tool that calculates the costs by city. And here’s a sample calculation: In Baltimore, there’s an estimated 151,105 dogs, of which 10,918 are assumed pit bull type dogs. The costs associated with enforcing laws against pit bull ownership would be $992,606 per year.

Kristen Auerbach, spokesperson for the Fairfax County Animal Shelter in Northern Virginia, says that lifting restrictions against pit bull ownership would have significantly waggy other benefits, as well.

Even though her jurisdiction doesn’t have breed restrictions, “people have heard the stories about beloved family dogs being taken from their owners in places where there are full bans on pit bulls. That is every dog owner’s worst nightmare,” she said. “People don’t want to risk it.”

Getting rid of these laws would not just let people adopt without fear of their animals being taken away, she said, but would also help counter negative stereotypes.

“BSL not only impacts people in Maryland, but contributes to the overall perception of pit bulls as different, which inevitably works its way into the public conscience and effects adoptions, shelter policies, and even other public policy,” she said.

Auerbach cautions that even if these anti-BSL laws are passed, that isn’t the end of these problems, since many landlords won’t rent to people with pit bulls. One of several anti-BSL bills now under consideration in Maryland would actually address this point: HB 422 is aimed not only at stopping localities from classifying dogs as “dangerous” by breed, but would also apply to landlords and condo associations.

With these bills being passed it is now up to Congress to help make an actual difference.

What are your feelings on this legislation?