I love Snopes.com! Have you ever heard of the myth-busting site?

There was a warning going around that ice water could cause bloating and muscle spasms to dogs after a woman posted a story about her Corgi back in 2010. I decided to bring it up because it seems like every time it gets hot or summer starts people tend to start spreading this rumor again and again.

Even Snopes.com looked into it to make sure the email version of the story they found was also false. 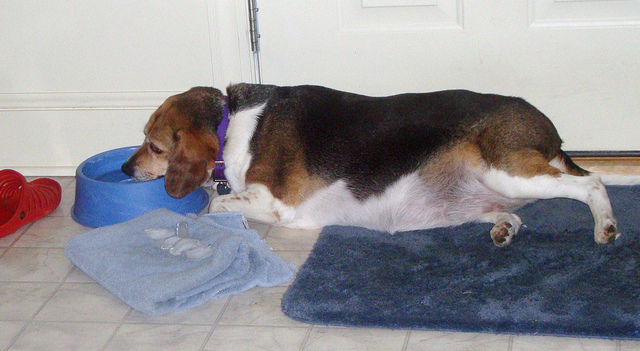 Below is some information on what can cause problems for your dog when it comes to eating and drinking:

The real danger comes from eating too quickly, which can lead to gastric dilation volvulus (GDV), according to the American College of Veterinary Surgeons.

Randall Carpenter, a doctor of veterinary medicine at Family Friends Veterinary Hospital in Grand Rapids, MI, told Fox 17 that he’s seen the Internet post since 2007. He said if a dog is drinking too much, bloat can happen regardless of water temperature.

Audrey Harvey, a veterinarian with more than 20 years of experience in small animal practice, said in a 2010 post that feeding dogs several smaller meals every day, instead of the standard one or two large meals, can help prevent bloat. She also advised not letting dogs drink a lot of water at once, and she said owners should wait about an hour to feed dogs after exercise.