I am always surprised to hear that most people think that the whole chocolate can kill dogs saying is just a myth. I understand it is hard to comprehend that we can eat chocolate but our pets can’t. Well think about it this way, caffeine is toxic for human in very high doses and it can even kill very small children and babies.

Here are a few more facts about why chocolate is so deadly: 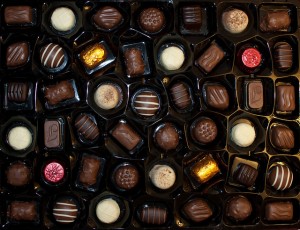 It turns out that, for dogs, a chemical in chocolate called theobromine is the source of the problem. Theobromine is similar to caffeine. According to this page, theobromine is toxic to a dog when it ingests between 100 and 150 milligrams per kilogram of body weight.

Different types of chocolate contain different amounts of theobromine: It would take 20 ounces of milk chocolate to kill a 20-pound dog, but only 2 ounces of baker’s chocolate or 6 ounces of semisweet chocolate. It is not that hard for a dog to get into something like an Easter basket full of chocolate eggs and bunnies and gobble up a pound or two of chocolate. If the dog is small, that could be deadly.

So now that you know for sure that this is not a myth, will you be more careful not to leave out your chocolate this holiday season?