Here are 5 simple dog tricks that every dog should know: 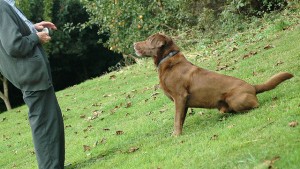 High Five: Start by having your dog shake. If your dog does not shake, just touch the  back of her paw and say shake. Once your dog starts to offer her paw, turn your  hand up so your hand is facing your dog.  Start saying “high five” while holding your hand up. When yoour dog hits  your hand with her paw, quickly say good dog and reward with a  treat.  When your dog starts to hit your hand with her paw, start to slightly raise  your hand higher and higher.  Keep raising your hand until you can stand and your dog jumps up to high five  your hand. Reward your dog as soon as she does.  Hold your right hand in the air again and say the command “high five” but do not reach for your dog’s paw. Hopefully he will place his paw against your hand. Allow him the opportunity to do it on his own before you reach for his paw. If he does it on his own, reward him immediately with treats or praise. Tip: They should first know how to shake before teaching this.

Speak: Choose a game that your dog loves to play, like catch with a ball, or hide and seek with a toy. Then get him excited by saying, “Let’s play! Want to play?” and show him the ball or toy. Jump and act silly so he barks and then say, “Good dog, speak!” Then play the game as his reward for learning “Speak”. Tip: You can’t make a dog bark, but you can get him happy and excited so he wants to bark. After a while, your dog will bark when you say, “Speak.”Caution! If you have a dog that already causes trouble because of his barking, you might not want to encourage this behavior. If you decide it’s ok to teach it, be sure to teach ‘quiet’, too, but do it at some other time.

Fetch: If your dog doesn’t fetch naturally, have an adult cut a slit in a tennis ball (a smaller, rubber ball if that is too big). Put some treats inside the tennis ball. Show your dog that there are treats in there, and give her one. Then, throw the ball. In the beginning, run with her and get the ball; then give her the treat. Soon you will be able to throw the ball and she will go get it (because she wants the treat!).Tip: After your dog has figured out what he has to do to get a treat, start throwing the ball two times in a row without giving him the treat. What you are trying to do is give him the treats less and less often so someday he won’t need the treats in the ball to fetch it.

Wave: Your dog should know how to shake hands before learning this trick. Face your dog and hold out your hand as if you are going to shake. When your dog lifts her paw to shake, don’t grab it, just pull back your hand, and say “Wave”. Then give your dog a treat.Tip: At first your dog may not lift her paw very high. But once she realizes that you’re going to give her a treat if she holds it up there, she’ll get it. You may have to tease her a little with your hand so she thinks you are going to shake with her. Waving your hand a little may help to get her paw into a waving motion as well.

How did you teach your dog tricks and what were the first few tricks you taught them?