Does your dog come when you call no matter what? Tricks are cool but won’t save your dogs life in a dangerous situation, let’s say, near a busy street.

Below are 12 tricks that can help save your dogs life in an unfortunate, tricky or new situation:

Sit – “Sit” is one of the most basic tricks we can teach our dogs. When a dog is in a “sit” position, he knows he is meant to stay sitting until you say otherwise. If you need your dog to just chill out while you take care of something, you can put him in a sit position, knowing he won’t run off and get into trouble while you’re distracted. It’s a perfect command for situations like standing in a crowded place or if you’re loading the car for a trip and need Fido to hang out before getting in.

Lie down – The “lie down” trick is another way to have your dog stay in one place and out of trouble. Teaching your dog to lie down — especially if you teach him to drop to a down position when you signal from far away — can go a long way in keeping him out of trouble. A down position is one of increased vulnerability, so if your dog is getting too rambunctious around other dogs or is too wound up in a certain situation and simply needs to mellow out, a “lie down” command gives him an opportunity to calm down and remember his human is the one who is in control. Like the “sit” command, this is an active command, meaning your dog isn’t just lounging — he should be purposefully staying in one spot, keeping focus on you and waiting for his next command. 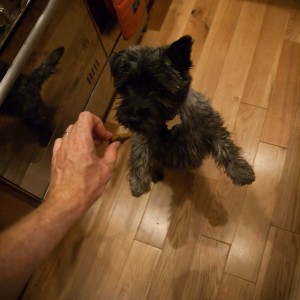 Don’t take candy from strangers – It’s sad to say, but you can’t always trust that someone has good intentions when giving your dog a treat. There are horror stories of people handing out poisoned “treats” to dogs. But we don’t have to be as extreme as that in understanding why passing up food from strangers is a smart trick for your dog to learn. This also works for dogs that have food allergies and you don’t want some random person at the dog park feeding them something that’ll cause a reaction. And it also works well to prevent unwanted begging, because let’s face it: A dog that begs is simply being rude, not cute. However, this might be one of the hardest things to teach your dog. And I can’t claim to have taught mine this trick — and I probably never will. Since my dog is fearful of strangers, I have encouraged the idea that humans (even strangers) are walking treat dispensers….

Would your dog be able to do each and every one of these tricks under pressure to save their own life?
Article Source: Mother Nature Network
Image Source: Flick
ADVERTISEMENTS