Have you ever worried about not being able to afford your fur baby or is that just not an option? Maybe you are older and are struggling to put food on your own table let alone your precious pooch. Have no fear, there are people all over the world who can help. It all starts with your local shelter who should be able to point you in the right direction to get the help you and your fur baby needs. 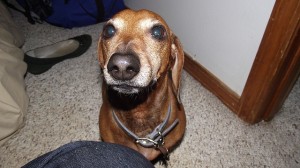 Here is a heartwarming story that all started from a heart breaking note:

The heartbreaking note reads, “Our dog is 13 1/2 years old he is sick starting yesterday with bloody stools, vomiting. Had a skin disease for a few years. We are both seniors, sick with no money. We cannot pay for vet bills, or to put him to sleep. He has never been away from us in all those years, he cannot function without us, please put him to sleep.”

Instead, shelter workers called Leave No Paws Behind, Inc., an all breed, all foster based rescue that specializes in seniors, who picked up the dog and initially named him Harley. When the dog was taken to a veterinarian, it was determined he could not only be treated, but most likely had a “couple of more years” left in him, according to an update on the organization’s Facebook page. The rescue realized the little dog had been well-cared for and according to the note, very much loved, so they decided to try to reach out to the dog’s owners.

When the dog owners came forward, they explained they are indeed both sick and cannot even afford their medical treatments or tires for their vehicle. They had taken their dog, who is actually named Otto Wolfgang Maximus, to a veterinarian and were told that they would need to run costly tests. When they realized they couldn’t even afford to have their dog euthanized by the vet, they were “hysterical” and didn’t know what else to do aside from leaving him at the shelter.

The organization believes the Otto’s owners loves him very much and just felt they had no other choice. “Ninety eight percent of the rescues we take in belong with us,” said Toby Wisneski, founder of Leave No Paws Behind. “There are 1-2 percent of owners who love their animals very much and just believe they have no other option but to surrender them.”

Wisneski has decided to make the couple a permanent foster for Otto and return the dog to them with the provision they can make regular, weekly visits to the home. The organization will maintain the cost of Otto’s food and veterinary care for the rest of his life.

With the rising cost of pet care it is no wonder why we are now hearing stories like this. On top of our struggling economy, our pets are usually the first ones to suffer. This story goes to show you that we understand and care for each other and their fur babies and there are other options besides surrender.

Please take the time to seek them out, I mean, wouldn’t your dog do the same for you?