I thought it would be neat to learn a little something about the African wild dog or Cape hunting dog. They are usually found out in the open woodlands of the sub-Sahara African area. I came across this beautiful image and felt compelled to learn a little about them and share what I found out. 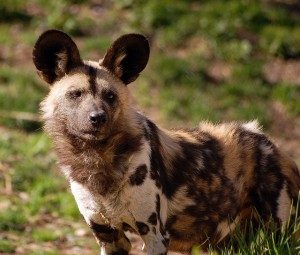 Here are some of the main characteristics of these types of wild dogs:

These long-legged canines have only four toes per foot, unlike other dogs, which have five toes on their forefeet. The dog’s Latin name means “painted wolf,” referring to the animal’s irregular, mottled coat, which features patches of red, black, brown, white, and yellow fur. Each animal has its own unique coat pattern, and all have big, rounded ears.

African wild dogs live in packs that are usually dominated by a monogamous breeding pair. The female has a litter of 2 to 20 pups, which are cared for by the entire pack. These dogs are very social, and packs have been known to share food and to assist weak or ill members. Social interactions are common, and the dogs communicate by touch, actions, and vocalizations.

They usually travel in packs of 6 to 20 and used to travel in larger ones but due to domestic animal fears and farmers, they have quickly been cut down in size.

What do you know about these beautiful creatures?