Have you ever noticed that your dog seems to always know exactly how you feel? They seem to know when you need comfort and love and seem to provide it instead of require it when they notice you are the one that needs consoling. Coincidence? Let’s find out. 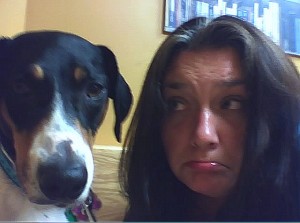 11 Dogs were tapped to conduct a study about their brains and human emotions or audible sounds, check it out:

Our four-legged friends have a little patch of their brain devoted to deciphering emotions in human and dog voices, scientists Thursday in the journal Current Biology. And the neural circuitry acts surprisingly like the voice-detection device found in people’s brains. The happier the barks or giggles, the more that brain region lights up. The sadder the growls or whines, the less it responds. The voice detector in the dog brain is in a location close to the detector region in the human brain.

Andics and his team wanted to see if dogs had an analogous region in their brains. But how do you get an energetic border collie to sit still long enough to perform the experiment? “If they move more than a few millimeters, we have to start the scans again,” Andics says. “We’d put an experienced dog up in the scanner, and he’d be up there sitting still,” Andics says. “Then we’d bring into the room a less experienced dog. And he’d get so jealous! He just wanted to be on the scanner bed like the other dog. It became the place of happiness.”

They put headphones on each dog and let them listen to three types of sounds: human voices, doggy voices and environmental noises, such as a phone ringing or a hammer hitting a nail. The team then looked to see which parts of the brain responded. Lo and behold, just as with humans, the dogs have a little patch of neurons that light up most strongly when they hear voices of their own species — other dogs barking, growling or whining. There also was a region that was sensitive to emotional tones in both human and dog voices. And that area was in the same location as the one found in people — right in the back of the brain near the ears. “When you how dogs respond to emotional cues in sounds, it’s very similar to how humans respond,” Andics says. “It’s in the same brain region … and is stronger with positive vocalizations than negative ones.”

So just like us, dogs hear short bursts of sounds as positive or more happy like laughing. It is the longer, drawn out sounds that grab more attention like crying or moaning in pain.

Did you think that it was just your dog that was special? Well, they probably are!