Below s some more information on this topic and on a study of how dogs really feel: 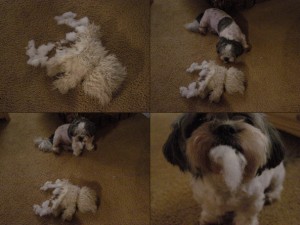 “I don’t think dogs actually feel shame,” Lemire said. “I think they know how to placate us with this sad puppy-dog look that makes us think they’re ashamed of what they’ve done. My guess is that their thinking is: ‘Oh man, my owner is super mad about something, but I don’t know what, but he seems to calm down when I give him the sad face, so let’s try that again.'”She thinks the online dog-shaming memes are all in good fun.

“People come for a laugh and camaraderie,” Lemire said. “They see that their dog isn’t the only one who does awful things. People don’t shame their dogs out of anger, they do it out of love.”

One of the first scientific studies on the “guilty dog look” was conducted in 2009 by Alexandra Horowitz, an associate professor of psychology at Barnard College in New York City. One of her books, Inside of a Dog: What Dogs See, Smell, and Know, included the findings.

“I found that the ‘look’ appeared most often when owners scolded their dogs, regardless of whether the dog had disobeyed or did something for which they might or should feel guilty. It wasn’t ‘guilt’ but a reaction to the owner that prompted the look,” Horowitz said.

“I am not saying that dogs might not feel guilt, just that the ‘guilty look’ is not an indication of it,” she added. She also believes there is a difference between guilt and shame.

The fact of the matter is, we can’t just ask them if they feel bad about something and unless they walk around sulking for days, they probably don’t.

The more important questions is, are you Ok with this?